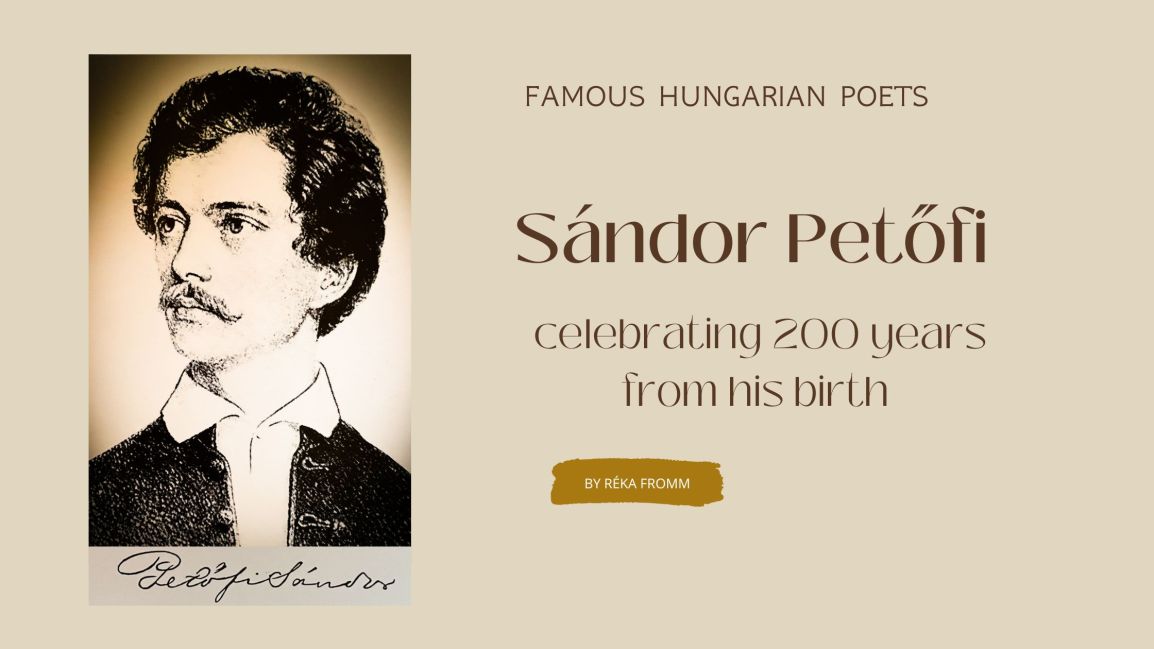 Every Hungarian knows who Sándor Petőfi is, but he is also well-known outside Hungary’s borders. Translated into several languages (including but not limited to English), he is one of the greatest personalities of Hungarian literature also acknowledged in the world literature.

Sándor Petőfi was born 200 years ago on New Year’s Eve. At least that’s what most historical documents tell us. However, his birth date is controversial. According to many accounts, including his own, his actual birthday was December 31st, 1822, and the date of his baptism was January 1st, 1823.

Since the one day made the year of his birth questionable, the Hungarian government declared both 2022 and 2023 Petőfi-years. We celebrate him all over Hungary and in all Hungarian-inhabited regions.

Hungarians everywhere know about him from their childhood days, and most of us can recite (and sing) several of his poems throughout our lives. His poems are part of everyday lives of Hungarians, since he wrote about moments in daily life, and the most common human emotions.

Besides being a worldwide-known Hungarian poet, Sándor Petőfi was an outstanding figure of the 1848 revolution. His role as a poet and revolutionary is inextricably linked in history as one of the spiritual leaders of the 1848 war of independence. He strongly believed in the Hungarian national freedom, and fought for it, not only with his pen but also by enlisting and fighting in battles.

Petőfi considered it a poet’s duty to lead the people. Evidence of this idea is his poem In The Name Of The People, among others. Through his revolutionary poems, he became a symbol of the Hungarian fight for freedom in 1848.

The National Song, perhaps Petőfi’s best-known poem, was the symbol and trigger of the revolution, the first revolutionary poem recited on March 15, 1848, encouraging the youth of Pest.

Not only did he encourage others, but he himself fought on the battlefield for Hungarian freedom. This is how death found him, as he fell at the battle near Segesvár (Sighisoara), at the young age of 26.

His poetic career spans barely ten years, but has a huge place in Hungarian poetry and literature as one of the leading figures of Hungarian Romanticism.

Petőfi’s poems mix realism, humor, and descriptive power, underlined by a rare intensity. He introduced a fresh voice in Hungarian literature, a direct, clear style with no embellishments, adapted from Hungarian folk songs. The first poet to imbed the simplicity of folklore into artistic poetry, he believed in the importance of folk poetry. He best expressed his thoughts on the subject in his letter to János Arany:

“(…), folk poetry is the true poetry. Let’s work towards making it dominant! If the people rule in poetry, they will be close to ruling in politics as well, and this is the task of the century, this is the goal of every noble heart”

Petőfi succeeded in doing that. He raised folk poetry to an artistic level and used it to express subtle emotions and political and philosophical ideas.

Because of their easy-to-remember forms, his poems were often set to music, and most Hungarians know them to this day either as poems or as songs.

During his short life, Sándor Petőfi also wrote his name into the world literature. His poems are known world wide, in translation. They are available in German, English, French, Irish, Italian, Slovenian, Swedish, Norwegian, Russian, Romanian, and Greek, among other languages.

If you type the name Petőfi into the Internet search engine, you’ll find articles and writings about him in English (and in several other languages besides Hungarian).

You can still find his poems in English today in the volume Selections from the Poems of Alexander Petofi in several editions, including on Amazon, but you can also read them on various websites.

Along with the other European Romantic poets of his era – Shelley, Keats, and Byron in England, Pushkin in Russia, Mickiewicz in Poland – Petőfi laid the foundation of modern poetry and modern literary language. What all these poets had in common was their revolutionary spirit, their passion for love and social justice.

It might seem a bit exaggerated to compare a Hungarian poet few heard about to the above great names, but they all did the same for their respective nations. The difference is only the size of their nations.

They were all important national figures; they played similar roles in the history of their own nations. All of them championed freedom, love, independence, equal opportunity and respect for all people regardless of social status.

One of these great artists is Petőfi, who created world-class poetry in a language not widely known, and spoken by very few, but who was included in Victor Hugo’s famous poem “Carte d’Europe”.

He is one of those who changed the way Europe thinks.

Besides the ideas, Petőfi, like the greatest 19th century poets in other European countries, also revolutionized the poetic language. It was the era when poets saw the classicized language as obsolete, not enough to reach the masses. They introduced every-day language in poetry, moving the common, everyday language from the periphery to the center of literary works.

Petőfi did this for the Hungarian literature, by creating a poetry based on simple meter and rhymes, closer to everyday speech, similar to folk poetry. With these innovations, he created works that stood the test of time, that are still read, recited, sung, and translated to this day.

Petőfi’s short, eventful life is almost as well known as his works. Films, novels, plays were made about him over the years. His memory and name are preserved by many public institutions both in his home country and beyond. Statues of him stand in many cities of Hungary, but also outside of his country’s border, in Bratislava, Marosvásárhely, Ungvár, even in Beijing and Shanghai.

In the honor of the 200 year anniversary of his birth, we will also celebrate our national poet, Petőfi, here in Phoenix with a musical and poetic afternoon on February 17.

Featuring guest speakers from Hungary and California, the Hungarians of Arizona will have the choice to take part in two performances. On Friday afternoon, Róbert Sinha, along with historian David Dean and Réka Vicsacsán, a professor specializing in intercultural communication, will give a lecture at Grand Canyon University about what freedom and patriotism meant to Petőfi. The lecture will address the question of to what extent can his poetry address us today and do they say something about the reality in which we live, in which European minorities live. Is there a difference between the way American culture and European culture think about freedom? These and similar questions will arise during the discussion following the presentation. Then, singer Noémi Sárog will perform several Petőfi poems set to music by Róbert Sinha. Admission to this performance is free.

For those who cannot attend, the Phoenix Hungarian Cultural Association offers an event in the evening, featuring both speakers. We will contact you with the details soon.

A Hungarian native from Transylvania, Réka Fromm is the language instructor for adults at the HCA Phoenix. She is teaching Hungarian as a foreign language for English-speaking adults, leading small groups of beginner through intermediate classes through Zoom. A Phoenix resident for almost three decades, she is also a travel writer and occasional translator. View all posts by E. Réka Fromm